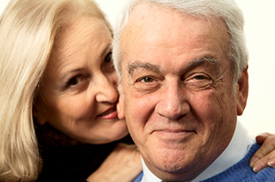 Intraocular lens implants, also known as IOLs, are a key part of eye surgery. These devices essentially act as artificial lenses to enhance the eyes' ability to focus. IOLs are used most commonly to treat cataracts , but have many other uses as well. Intraocular lens implants have been used to help people of all ages regain vision and enhance quality of life.

What are Intraocular Lens Implants (IOLs)?

Intraocular lens implants are used to treat many different conditions. Virtually any problem that stems from damage or degeneration of the lens can be addressed with an IOL. IOLs are most commonly associated with surgeries that treat:

IOLs are typically made from a technologically-advanced synthetic substance. This substance closely resembles a natural lens, so that it may easily integrate with the rest of the eye.

Intraocular lens implants have been used to provide millions of people with increased vision quality. This type of treatment is FDA approved for use in people 18 and over suffering from cataracts, myopia and many other eye-health conditions. Some providers offer intraocular lens implants (IOLs) for children, although these uses are considered off-label.

IOLs are generally broken down in to two categories:

Regardless of the type of lens used, the process is largely the same. A small incision or flap is made, either through the use of a micro-scalpel or laser. Following that, the IOL is placed either on top of the existing lens or inside the eye.